Up in the Air

Yesterday, when I delved into the world of blogging, I’d had hoped that by now I would be writing that we were packed and ready to go but unfortunately, not everything has gone to plan. I had counted my chickens before they had hatched. In fact, today has been one setback after another.

At the start of this week, on Monday, I took the car to the mechanics to replace the brake pads and have an oil change. It seemed I had opened up a can of worms. He pointed out that there may be some issues with the turbocharger and suggested that I got it checked out with a local turbo specialist. As he had suspected, the turbocharger was not working correctly and had also pushed through dirt into various connecting parts.

Before we knew it, we were making our way across the city to yet another mechanic who would take out the turbo, send it to the specialist and clean up or replace other parts of the engine. The one comforting factor of the costly outlay was that the car would be raring to go come Thursday. When I collected it today, the car seemed to be running OK and I gave it a celebratory hoovering.

Shortly afterwards, I needed to make a short 70km round-trip to collect our kids and my mother-in-law from the countryside. Imagine my despair when 40km into the journey, a warning message popped up with the message ‘engine failure’ and I lost the power of acceleration. It did not bode well for tomorrow’s journey. I managed to get the car there and back in one piece but the turbo is definitely not working. Thankfully, the work that has just been done is under guarantee and so I’m taking back the car first thing in the morning. We were hoping to leave at midday, so it only gives me a couple of hours to sort it out.

We’ve spent the last two summers in Macedonia and with a bit of luck we’ll be doing so again. We usually drive down and stop off in a couple of places along the way. Last year, we spent much of the route pottering around  Bosnia-Herzegovina in search of various waterfalls and this year, we’ve decided to drive down through Ukraine and Moldova. Over the last decade, I’ve travelled regularly in Ukraine, but it will be a first visit to Moldova. Our planned route is below: 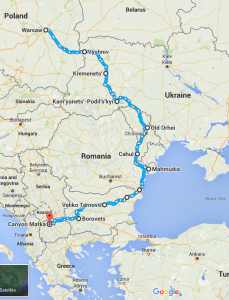 Let’s hope that it materialises.

to delve into something –  to explore

setback – a complication, something that slows you down

pointed out – to show somebody something or tell them about it

raring to go – enthusiastic about something, ready

hoovering – cleaning with a vacuum cleaner

pottering around – move without purpose