King of the castle

Another day of trafficless, straight Ukrainian roads awaited us. Outside of the towns, Ukraine is such a breeze to drive in that I can’t imagine how anyone could have any problems. Kremenets to Ternopil was straightforward, slightly bumpy, relatively empty and very straight. Ternopil was easy to navigate around and rather than following the M-19 towards Chortkiv, we opted to go to Husiatyn a different way.

All was going to plan until I saw a sign for ‘Sataniv’. Sataniv is a small town, diagonally to the south-west of the Ternpoil – Husiatyn road, theoretically its shorter. I threw all caution to the wind and deviated from our planned route. Sataniv it was.

The road was empty, first passing through some picturesque fields and later through a tunnel of trees. The road gradually became more and more narrow, as if nature was reclaiming it.  On reaching the village of Krasne, the road disintegrated totally, it was one pothole after the other and the name of the game was trying to choose the smallest pothole or trying to drive on the adjacent verges as much as possible without scratching the doors on branches.

After much toiling, we eventually made it to Sataniv. Sataniv is not really worth the diversion and you’d be best off avoiding doing what I did. From Sataniv, it’s a straight road to Kamyanets-Podilsky and it’s in good condition.

The route with a small diversion to Sataniv 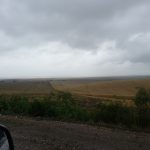 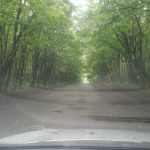 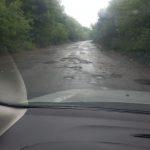 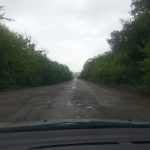 When will this road end!! 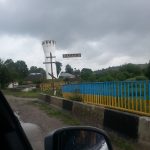 The newly built part of Kamyanets-Podilsky is the same as any other Ukrainian town, wide roads and some communist blocks but it’s the old town that attracts visitors.

The old town seems somehow cut off from the rest of the town and in a way it is, for it’s surrounded by a deep canyon and river that runs around it. It’s connected to the rest of the city with a bridge. It has several impressive churches, cobbled streets, a fortress and castle but it seems rather quiet.

As has been the case throughout Ukraine, we have only seen Ukrainian tourists. This was not the case a couple of years ago, so I can only think the war in the East of the country is putting people off but it’s a pity because Ukrainians are friendly to tourists.

Castle entrance is 25 UAH for adults and 15 UAH for children older than six. 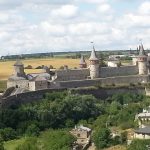 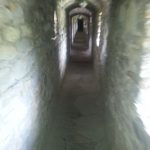 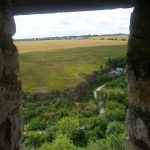 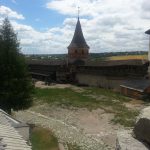 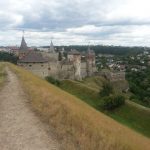 Khotyn is about 25km south of Kamyanets-Podilsky and although we would be passing it the next day, we were not sure how long the Moldovan border crossing would take and so decided to do it when the weather looked a bit murky. The drive down there was uneventful. We were warned about police on the road by several drivers flashing us and considered swapping drivers (with Sylwia being the rightful car owner).Thankfully, they seem occupied when we passed them. As you enter Khotyn, there is a sign to the historical sight and a road veering to the left. This road is really bumpy, but it’s no more than a kilometre before you get to a security guard manning the gate to the car park. Parking is 10 UAH, Entrance is 25 UAH and 15 UAH for children. Once again, Alex was deemed too ‘malinki’ to warrant being charged.

Khotyn overlooks the Dniester river. The majestic castle has stood the test of time. Unfortunately, the top is off limits, but we did instead investigate the chambers below which housed an interesting array of weapons such as catapults and battering rams and another room which held rather macabre instruments of torture. Admittedly, not ideal viewing for children but quite interesting for those with an interest in history, or just nutters. 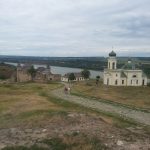 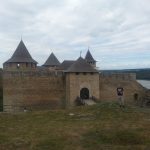 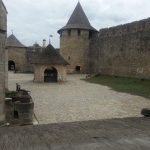 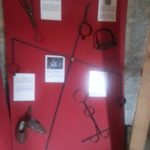 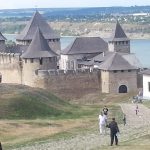 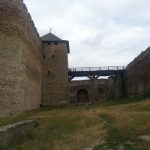 Kamyanets-Podilsky’s old town is surprisingly rural. There’s a bumpy cobbled road that leads from one of the main squares, down past the fort walls, to a small river that lies just a couple of hundred metres away from the castle. It’s tranquil and there are next to no tourists wandering around that particular area.

Our hotel, Bilya Richky was on the edge of the river, so you could enjoy a meal or a drink next to the water mills. There is plenty of room for children to play and there was also a small swimming pool, although that cost 15 UAH per hour.

We rented a chalet with two double rooms and a bathroom in between it. It was in a row of chalets, directly opposite from the restaurant/bar/reception and so you can drink coffee on the terrace. Various aromas emanated from the kitchen all day long as women toiled away cooking various dishes.

Shashylk – I had had a bit too much homemade wine by this time but I think the price was 60 UAH per 100g.

I thought that the stay at Bilya Richky was fantastic but Sylwia likes to put a damper on all things and warns that the walls are thin, so if you find yourself in a room next to a family with a young baby, you could potentially find yourself awake all night. The chances of this happening, however, are quite slim and I imagine the solution to it, would be another 1,5-litre bottle of homemade wine for 60 UAH. 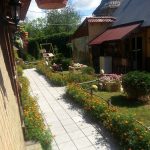 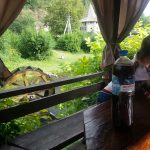 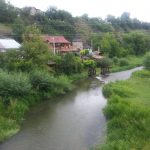 The most important news for parents is that Ukrainian children seem very friendly and willing to play with others and will get by on a mixture of languages and gestures. Our kids don’t even do this amount of socialising in the park in their own neighbourhood. We’ve had an unexpected amount of time to ourselves and plenty of time to sample local food and drink.

Ukrainian food is essentially very similar to Polish, however, it’s a bit oilier and the portions tend to be smaller. Vegetables are hard to come by and rarely seem to make it onto the dinner plate.

Vareniki are essentially the same as pierogi but a little smaller. Deruni are potato cakes. Pelmeni are similar to vareniki but with a doughier outer shell.

Most people will be familiar with borscht, the beetroot and sour cream concoction that Ukrainians will often start the day off with. What was new to me, though, was ‘zeleny borsch’ (or any other way you want to transcribe it) is known as sorrel soup in English. It’s similar to the Polish ‘szczawiowa’, however, it also contains a bit of beef and an egg.

The Shashylk with onions, wrapped in lavash with a spicy sauce was by far the yummiest meal we had.

Pancakes are common for breakfast. Fillings such as poppy seed paste, apricot jam and white cheese are the most popular. 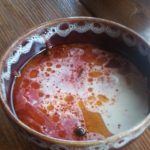 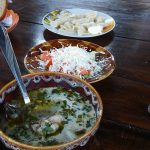 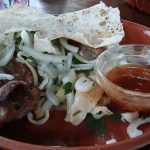 There are some caves called ‘Pechera Krysztalowa’ that are about 50-60km from Kamyanets-Podilskyi and would make a nice day trip when combined with Khotyn. Unfortunately, little Alex is going through a stage of not really enjoying dark tunnels and so we decided to pass up on a visit and not traumatise him!

In the next post read about driving across Moldova – the tourist attractions of Old Orhei and Cricova and how the Gagauz manage to rescue our opinion of Moldovans being grumpy.

the name of the game – the unwritten rules, the way something has to be done

putting people off – discouraging people from doing something

manning – operating or acting in a position

to put a damper on something – to act or speak discouragingly

hard to come by – difficult to find or obtain

doughier – having a thicker, spongier consistency

concoction – a mixture of various elements