Ohrid is fast becoming our second home. I first went there in 2004 and it still mesmerises me every time. I enjoy the chaotic roads of Ohrid. Few people indicate, drivers stop and park randomly in the street, shopkeepers are friendly and almost everyone greets you with a “Zdravo.”

There’s the lake, the castle, the bustling fruit market, the Turkish district which is good for a kebab or a haircut and if that’s all too frantic you can retreat to one of the smaller villages along the lake or in our case, the tranquil haven that is the Oaza Inn, where we work our way through Macedonia’s beer and wine supply while swimming.

Ever since we set foot in the Oaza Inn in 2014, we have felt at home. The gardens are kept in wonderful condition: the swimming pool is large, having our own kitchen enables us to cook up our favourite meals and eat far too much cheese and then there is the menagerie of dogs, the two German Sheperd Dogs – Aaron and Zana and two new additions, the puppy Bruno and an old, blind and deaf Spaniel – Lea. Our children love it and in all our travels, we’ve never found a more comfortable place to stay. 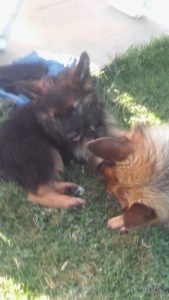 Bruno and his mummy!

The first year we made a point of doing a lot of sightseeing, the second year we spent a bit more time around the pool but visited a combination of old favourites and new places such as Bitola and Lake Prespa. This year we’d seen quite a lot of sights and driven a long way so we spent the first few days relaxing. 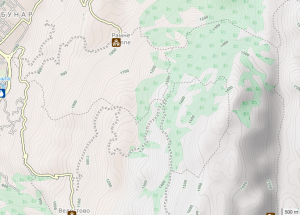 There was something I’d wanted to do for a while though and that was to hike the impressive mountains that looked down over Ohrid. I’d looked at them from the swimming pool with a beer in hand. There are no evident signposts from Ohrid but Wikiloc showed a couple of trails, so armed with the app and a fully charged phone, I set out at 7.30am in the morning and parked up on the road leading to Velestovo.

I had not given much thought to the trip and was planning to play it by ear. In retrospect, it might have been better off starting from Ramne or Velestovo instead, the first 30 minutes hike took me to Ramne. Initially, I took the wrong path and somehow made it to what seemed to be an unofficial dumping ground but once I was on my way I came across a Hermann’s tortoise. They are common in this part of the world. This little critter popped his/her head straight in when it saw me. 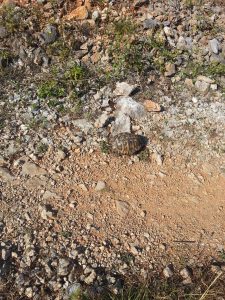 I filled up on ice cold water in Ramne,  and said, “Zdravo” to a few locals and continued the climb up the hill. The path was a small dirt track with a groove in it, possibly from erosion. It looked as though some electric pylons had recently been put in and though the view of the lake was good, it was difficult to take a picture without the wires spoiling it. 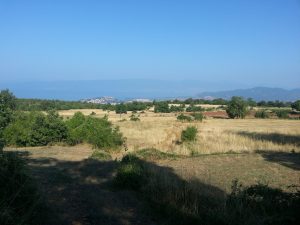 Already quite content with meeting a tortoise, I heard a rustling to the left of me and saw a startled looking creature that I believe to have been a pine marten. I did my best to capture it on camera. 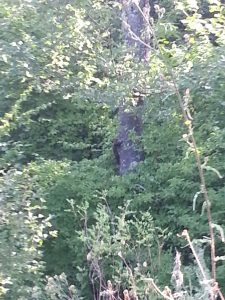 This path eventually became minor and lead to a more heavy duty dirt track which I walked on for a short while before following markings for the red path. The markings and the route on Wikiloc did not quite match up, so I trusted the markings that eventually lead to a spring that was marked on the map. From this point onwards, the route became a lot more scenic and I finally felt as though I was doing some proper hiking.

Throughout the trip, there was not a person in sight. The path twisted through trees, the leaves on the ground rustled with birds and lizards before flattening out on to what was a sort of plateau just below the main peaks.

The picturesque field with knee-high, wheat-like grass had a magnitude of crickets that jumped in either direction as I walked through it. It was only just possible to make out the path and it was clear that almost no one came here. 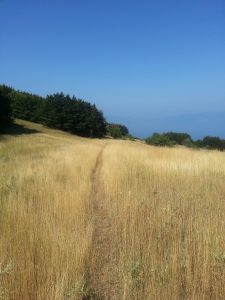 This is the path on the way back when I’d already walked through it once!

From the plateau, the path winds its way up the hill from here to the peak of Letnica, an extra 40 minutes walk. It was already about 10am and I thought it was best to return, leaving the ascent to the peak for another day. I’d left Sylwia and the kids without a fully stocked fridge at home and thought I might be in for it if I did not return soon. 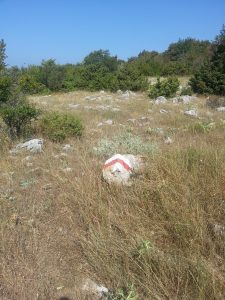 I chose a different route down which was more scenic, rather than following the path to Ramne. I followed the red hiking path, a path I highly recommend as it gives you fantastic views of Lake Ohrid but is also quite shady. 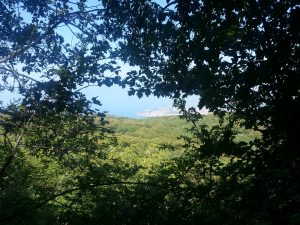 On the way down I also had another chance encounter with a tortoise, this time, it had caused traffic to stop as a man got out of his car to place the tortoise on the side of the road. This one was confident enough to stick his neck out! 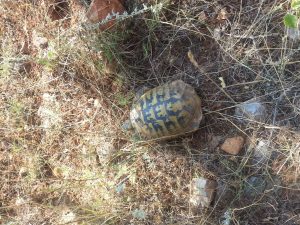 The more confident of the two tortoises

The next day I tried again to get to the top, this time taking a different route. I drove up to the top of the village Velestovo and parked next to the spring there. 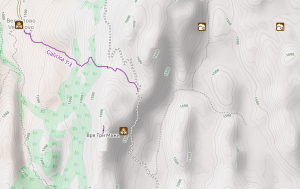 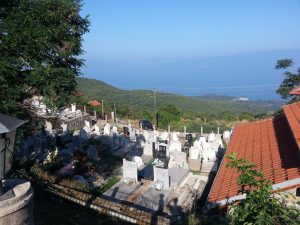 The hiking path starts next to the cemetery, it is a much shorter way to the top, partly because it begins at a much higher altitude but also because it’s quite steep. It is well signposted and after 30 minutes of fast walking, I got to a shepherd’s hut with the recognisable smell of goats and a spring. 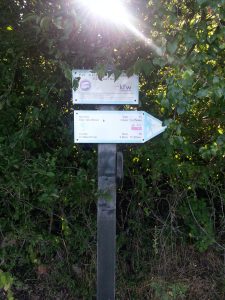 From here it was a further 10 or 15 minutes to a crossroads where on the right was a path to the Tri Mazhi summit. I decided to head for the peak of Vsoki Vrv first, partly because it was a bit higher but also because I thought I’d go to Tri Mazhi on the way back. 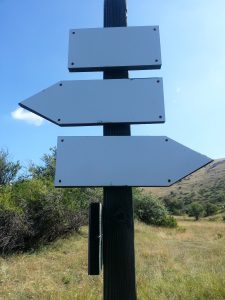 The signposts had faded from the sunlight and it was impossible to make out which way to go but I was able to use Wikiloc and follow the path in the right direction.
When you get to the top, you will see that there is a small valley separating the peaks that are visible from Ohrid from another mountain ridge of a similar height. Halfway through the first field, I started to be attacked by flies. They looked like regular flies but were smaller, their stomachs more visible and they seemed hyperactive. They were faster and were intent on buzzing around me and settling on me. I tried to shake them off, I wafted them away and tried making a break for it but nothing worked. I stopped to try and take a picture, I counted 30-40 on my forearm alone and my back was full of them. Later, bees joined in the party too but were easier to lose. I just couldn’t get rid of the swarm of flies, though, which I believed totalled around 200 at their strongest moment. Whether it was the same flies or new ones that kept joining in the fun while others dropped off I do not know. 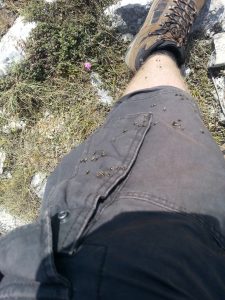 A small sample of the killer flies

I was wandering around near the peaks between Sredni Vrv and Vsoki Vrv, which was supposed to be the most rewarding part of the hike but was nowhere near as enjoyable as the climb itself. I could not enjoy the scenery nor walk at my own pace because I was too busy doing my best to lose the flies. Whether they were attracted to the smell of sun cream or sweat, I do not know. 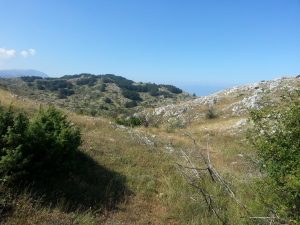 The home of the killer flies 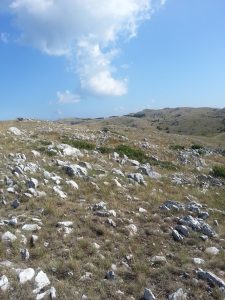 Walking along the tops of Sredni Vrv 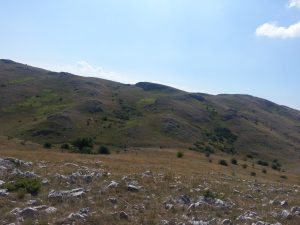 The peaks rise on both sides

It is possible to walk on from Vsoki Vrv to Letnica but I chose to run down the mountain until I got to the tree line at which point their interest seemed to ease up and I eventually lost them totally by the time I got to the crossroads with the sign to Tri Mazhi.

I tried walking up to Tri Mazhi but it was the same story, hundreds of bothersome little flies. I decided to call it a day. Maybe it was their breeding season. Perhaps this was why during my two days hiking, I did not see another soul. Whatever it was, the flies had taken the joy out of walking in this beautiful area.
There are plenty of nice hikes below the tree line, where in many cases you actually get a better view of Lake Ohrid. I would only tackle the tops having doused myself in a DEET like substance or at a time of the year when I knew it to be fly-free. It is not worth having your face pollinated to bag the peaks! Go prepared to combat flies and you will enjoy it.

to mesmerise – to fascinate

to set foot in – enter

to be armed with something – to carry, to have

to play something by ear – act spontaneously

rustling – a soft crackling noise, such as when animals move in leaves

wafted – wave with a hand or object

swarm – a group of flies