Back to the Bay of Bones

Shopping and Favourite Spots in Ohrid 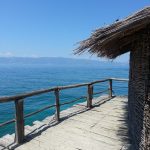 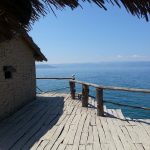 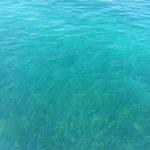 As our visit in Macedonia was nearing its end, we paid a visit to the Bay of Bones. I’m not keen on visiting the same places again and again but the kids constantly mither us to go to this wonderful museum on water. It was the third time we had been there. The ancient houses, show how inhabitants of the area used to live long ago but the colour of the water itself is a spectacular enough attraction in itself. Our kids love running in and out of the wooden shacks and playing hide and seek there! 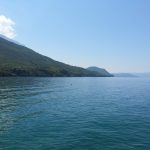 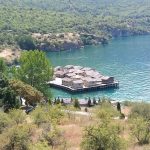 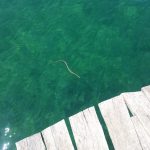 Occasionally a boat group of camera-clad tourists arrives at the museum and unless you like crowds, it’s probably better to avoid them. If you arrive during one of their viewings, I recommend having a coffee in the cafe, until the excitement subsides. You could also climb the fort above the open-air museum. This time round, I was particularly impressed with a water snake who reared his head out of the lake as if I had charmed him!

Our next stop on our last day was Trpejca, our favourite lakeside village. We picked up a hitchhiking Dutchman along the way. He was en route to Albania but we convinced him Trpejca was well worth a short stop. Though the beach is stony, Trpejca has one of the most beautiful bays on the whole lake and several cafes on the shore where you can enjoy a coffee or a meal. The Sharska burger, a cheesy variant of the usual ‘pljeskavica’ is a particular favourite. Sylwia ordered a stew that was mostly based on peppers, I can’t remember the name unfortunately but it was scrumptious. We’ve learned from experience that parking in Trpejca can be a bit of a hassle. There’s one extremely, narrow, steep road that leads down to a makeshift car park which is usually full and then turning around or reversing is pretty tricky. This time round we just parked up at the top and strolled down, a lot more straight-forward. After a couple of hours splashing around in the water and a spot of lunch, we headed back to Ohrid. 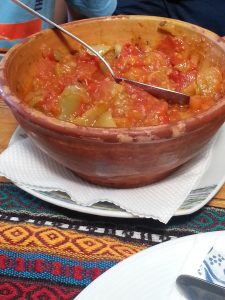 We have a couple of favourite spots in Ohrid as well. Unfortunately, for me, in Sylwia’s case, this is a jewellery shop, one where she would happily buy everything! The shop owner is very friendly and makes good long-lasting necklaces and ear rings with quirky psychedelic designs. You can find her shop on Facebook as – Sju’s Online Handmade Shop 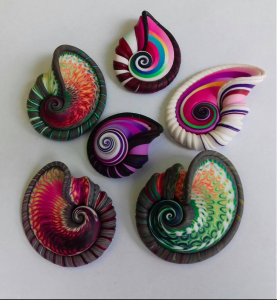 We ended the shopping spree at the market where we stocked up on food and presents to take home.

The next morning we bid farewell to the hospitable Blago and Jadranka and drove up to Novi Sad in Vojvodina, Serbia. We couldn’t help notice that the road between Ohrid and Gostivar, which was once extremely scenic, was now a giant building site as JCBs and CATs carved a new road through the mountain sides. Though the current road is in fairly bad shape and extremely windy, there is no doubt that this new one is spoiling its surroundings. The route through the Mavrovo National Park is far more enchanting and though it takes about an hour longer, it’s well worth it, we have taken it in the past.

Apart from the usual jostling at border crossings and tolls, and a little bit of racing between sports cars with Swiss plates (they usually belong to Albanians or Kosovans), the trip back was event free and we were in good time. A curious thing about the Serbian capital, Belgrade is that it’s actually faster to drive through it than use the ring road. The more direct route is a dual carriageway where as the ring road is still only half-finished and traffic often gets held up at a set of traffic lights on the suburbs of the city. Still, either of the routes is far superior to the current mess that can be found on the west side of Sofia where a ring road is also being constructed.

A pit stop in Novi Sad

We knew that after a long journey, we would not be up for much in the way of sightseeing. I’d booked accommodation on the outskirts of Novi Sad, close to the highway. I spent a few days in Novi Sad about 10 years ago, it’s a nice city and if you are not pushed for time, it’s definitely worth visiting.

The Hotel Vila Bor in Novi Sad is fairly basic but had a good batch of reviews due to its convenient location. The restaurant was pretty good and I admired the way the waiter was willing to try bits and pieces of numerous languages in his attempts to communicate with us. The Shopska salad was the best we’d had all throughout the trip. If you were staying longer than a couple of days, you might expect more from a hotel but it makes an ideal transit stop.

Happily travelling without any GPS, I made a bit of a boob because I had made a mental note that our hotel was located near the second Novi Sad turn off on the highway. Only after we passed the road, did I realise that all three Novi Sad exits were only accessible from a slip road which branches from a highway right after the toll before the city; I stopped at a petrol station and the pump attendant said that this happened more than 10 times a day to people. Don’t be the road system’s next victim!

The next day we got going quite early after a minimalistic breakfast. Crossing the Hungarian border was slightly time-consuming with other queues moving at frustratingly different speeds. In total it took around an hour, we had clearly chosen the most zealous of Hungarian border guards, who was either eyeing my passport with great suspicion or admiring the new bizarre designs of British countryside that decorate the passport pages.

We powered through Hungary, making good use of the vignette that we had picked up in Serbia. A 10-day vignette currently sells for 2 975 HUF and is usually printed off in the form of a receipt that you have to keep. I believe you have been able to buy them online since 2016 but we didn’t really look into that. Petrol and diesel are more expensive than in Hungary.

By 2pm we pulled into Eger, which was set back further from the motorway than I had imagined. A spa town with a picturesque mosque and a large aqua park, it is teeming with Polish and Slovakian tourists. I have visited Hungary countless times but never stopped in Eger, I was rather looking forward to it. It was scorching and so we dumped a couple of things off at our rented ground floor apartment and went in search of a free parking place near the waterpark and thermal bath – Egri Termál-és Strandfürdő. If you are feeling stingy or as in my case, simply didn’t have any forints on you to pay for parking, then I suggest Csakany Utca as the place to park. It’s within walking distance but the parking spots are free.

It was rather lazy of me not to have changed any forints but as we were only in Hungary for a day and most places accepted cards, I had not got round to doing it.  In retrospect, it would have been better to have done it earlier in the day. Payment for the thermal baths and water park could be paid for by card but all the tantalising snacks inside such as greasy lángos or ice cream could only be paid for in cash and were therefore off bounds.

The complex consists of about 10 different pools, ranging from unheated to a scorching 39 degrees, there is something for everyone. There is a sports pool for people who take things seriously and this requires swimming caps but the other pools have a rather relaxed dress code. Several shallow pools offer a variety of slides and fountains specially designed for kids but there are some big slides which I eyed up but never got round to using!

I won’t go into great detail about the water park because I’m sure there are plenty of people who have written about it. The 6000 forint family ticket is good value considering what’s on offer and I would not hesitate to go back, sometime, possibly en route to Macedonia again! The thermal baths are relaxing and the moving moat and slides are fun.

We bought a couple of extra gifts, mostly Hungarian wine – two types of Egri Bikaver. I am by no means a wine connoisseur, despite the trip to the Cricova winery. I will drink pretty much any old plonk but was most satisfied to find out that the pricier of the two retailed for four times the price in Poland.

Although Eger was quite busy it had quite a nice relaxed feel to it. We finished the evening off with a gyros. Darazsko Apartment, where we stayed is well-located and stocked with everything you might need.

Our journey back to Warsaw from Eger took a bit longer than expected because the 756 road was being dug up and we had a major diversion near Nowa Słupia. The 9-hour journey marked the end of our holiday and it was time to go back to work and the normal routine! It took us 9 hours but the mood in the car wasn’t ideal as we were struggling to find places to stop for something to eat. It was eventually rectified by the obligatory Orlen hot dog.

shopping spree – to buy a lot of things

to bid farewell – to say goodbye

to carve – to cut

toll – booth where you pay for using a motorway or bridge

in good time – here: to be on time or even early

teeming – to be full of