We spent the second night of our Irish trip in the quaint village of Portmagee. Clinging onto the Atlantic, this colourful village is a nice place to stay. We stayed at The Waterfront B&B and had a beautiful view over the calm inlet of water that separates mainland Ireland from Valentia Island. Live music and food can be found at The Bridge Bar and craft cider in the nearby Fishermans Bar. Like the rest of Kerry, Portmagee is well prepared for tourism, the bar offers a tasting table of Irish beers and the B&B was well stocked with all the necessities. A double room with breakfast costs about 80 euros. Portmagee gets its name from  a smuggler called Captain Magee who was able to use the rugged coastline to his advantage and smuggle contraband into the country. Today, it acts as a gateway to the nearby Skellig Islands and there are several sailors that offer trips to the island. To the naked eye, the Skelligs are little more than craggy looking rocks jutting out of the sea. Little Skellig, is out-of-bounds as it is home to more than 30,000 pairs of Northern gannets. Skellig Michael, on the other hand, is a UNESCO World Heritage Site due to its sixth-century monastery perched on the top. It is possible to climb up on stone stairs and is surrounded by beehive huts. We did not go as it was a bit off-season and Valentia Island and the Skellig Way, proved plenty to keep us occupied. The Skelligs feature in Star Wars: The Force Awakens and also inspired the Skellige archipelago in the Witcher series. 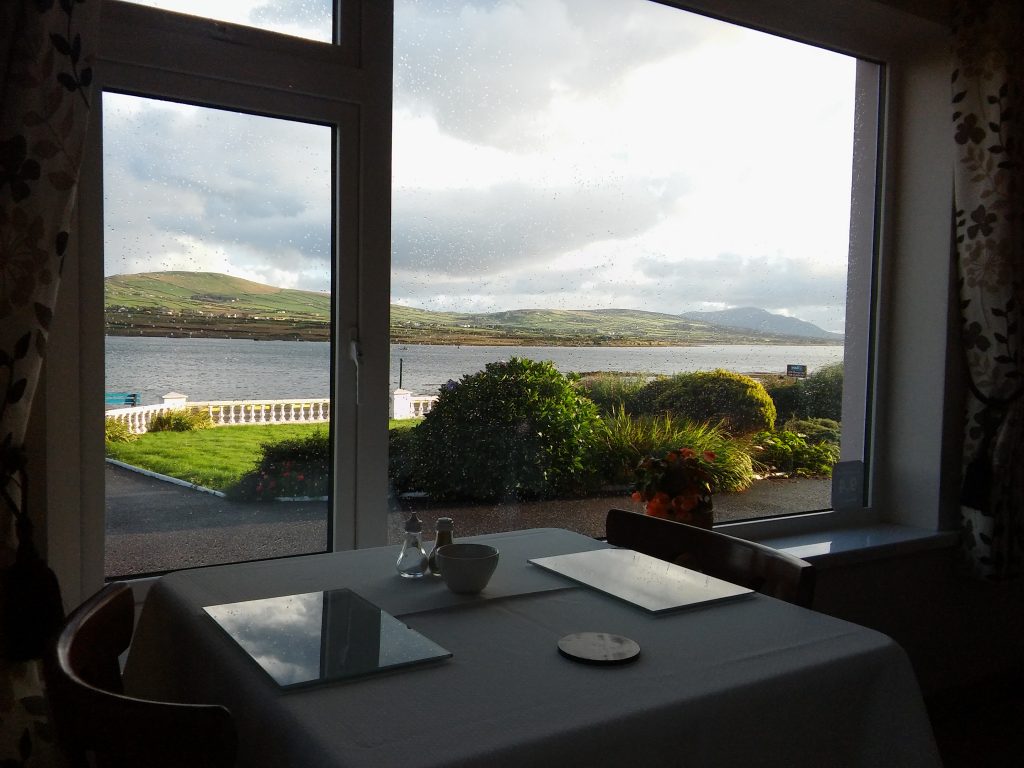 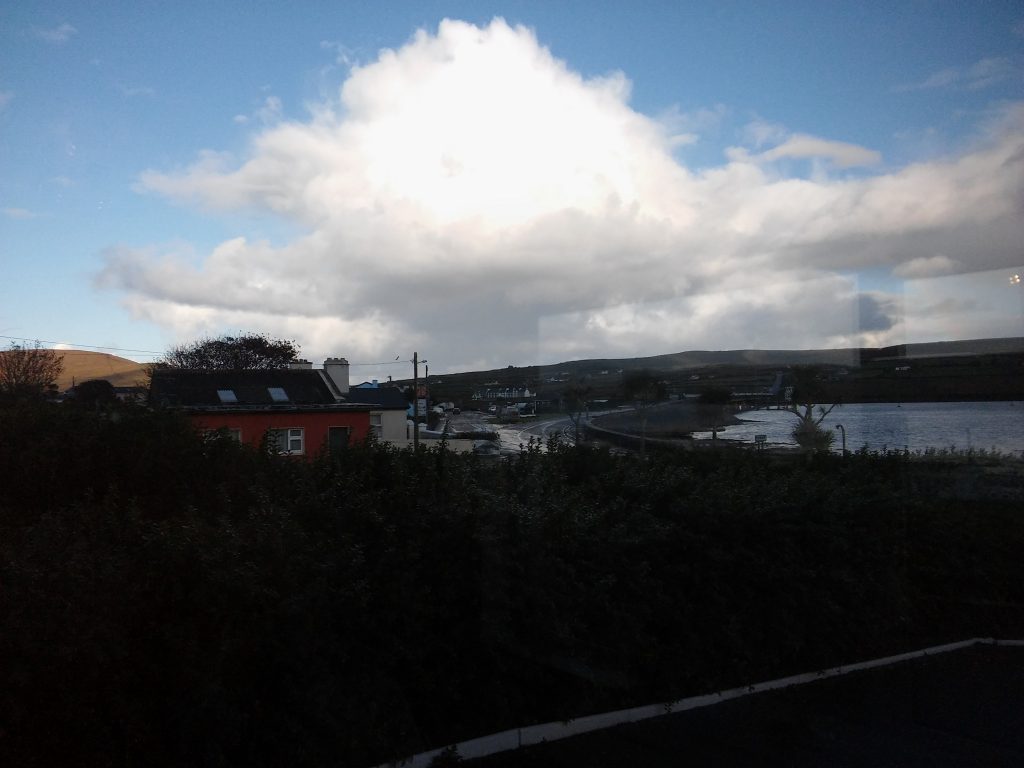 While researching my trip to Ireland, I became obsessed with Valentia Island, a quick google turned up impressive pictures of waves and unlike many of the other remote Irish islands, it was reachable by car due to a bridge that was built in 1970. It turned out to be one of the highlights of our trip, the skies were clear and there was only a trickle of tourists (well.. one other car). This windy picturesque outpost is tranquil, sheep graze on the lush grass and it’s possible to drive up to the top of Geokaun mountain using an honour system to pay for entrance to the park. Valentia once had a thriving mining community, where miners came from as far afield as Wales to work and pay was double that on mainland Ireland. The views from the top of Geokaun are stunning and there’s lots of little information plaques to inform you of what’s what. On the other side of the hill, are the Fogher cliffs which also have information panels about Irish mythology. 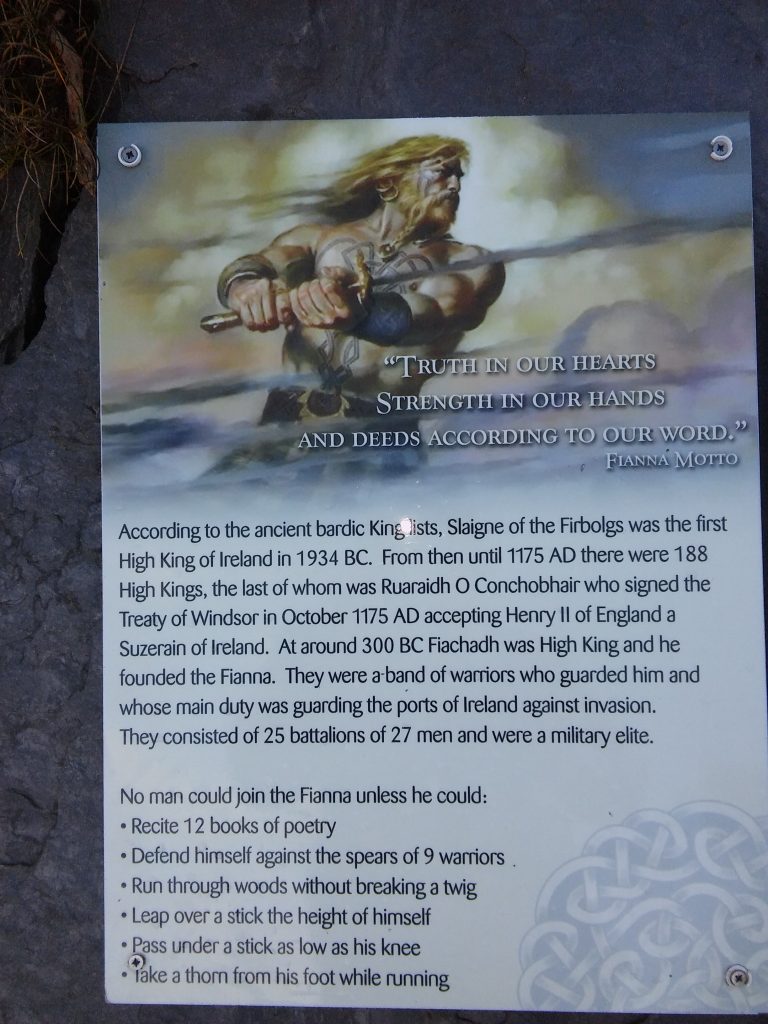 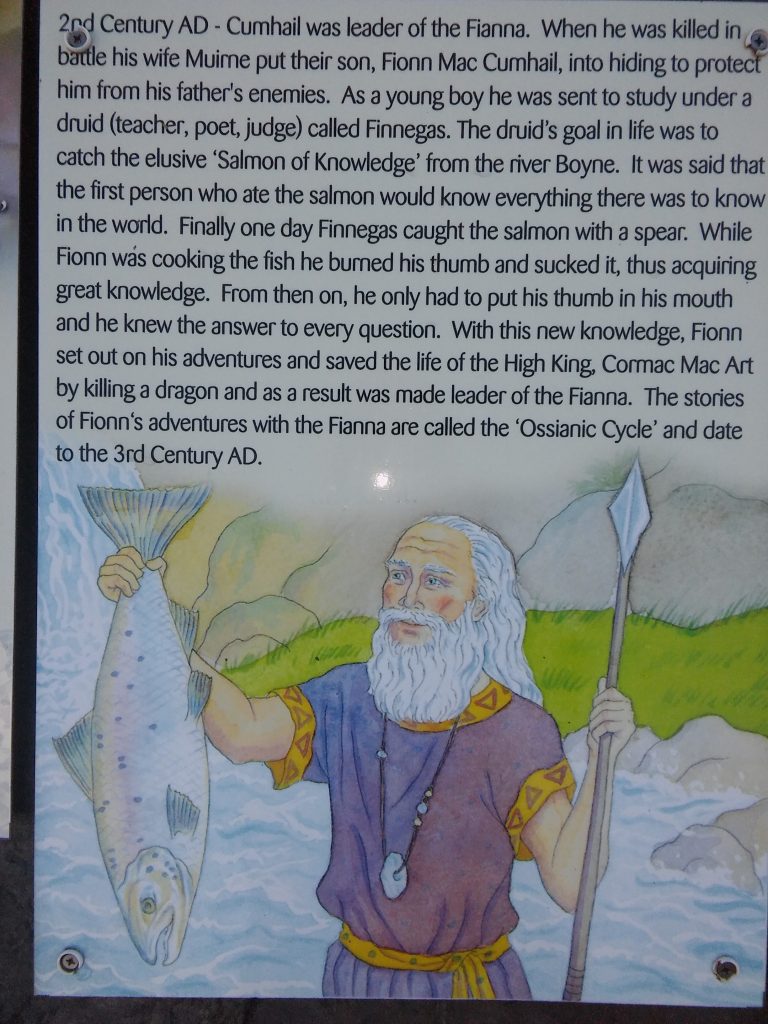 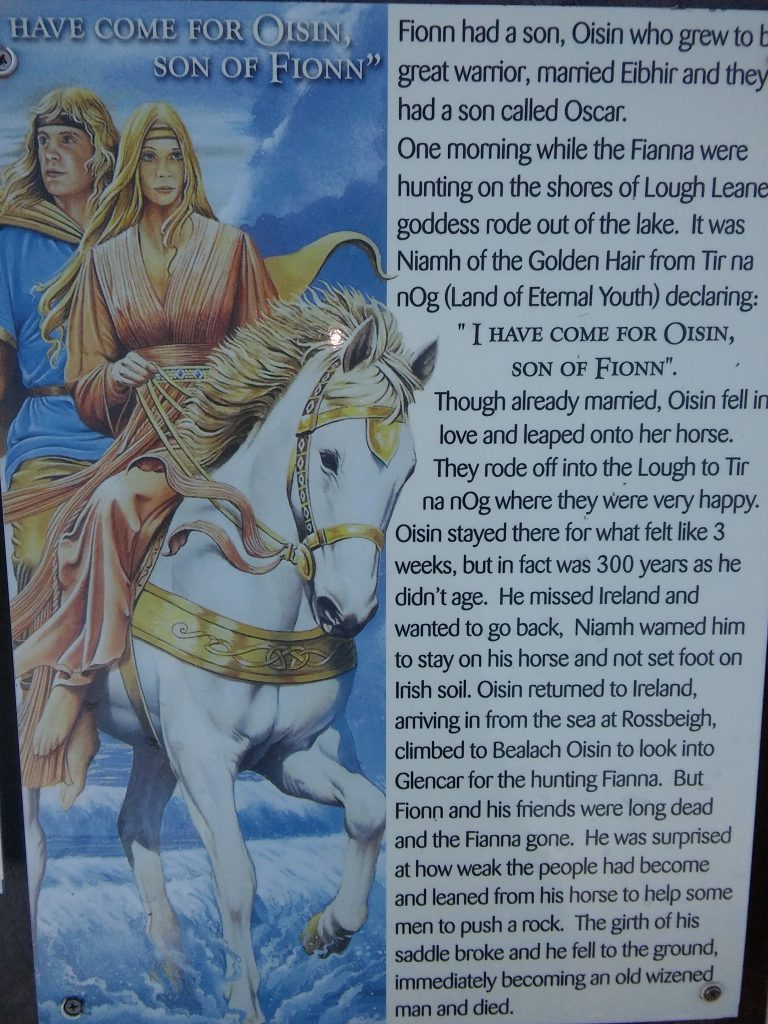 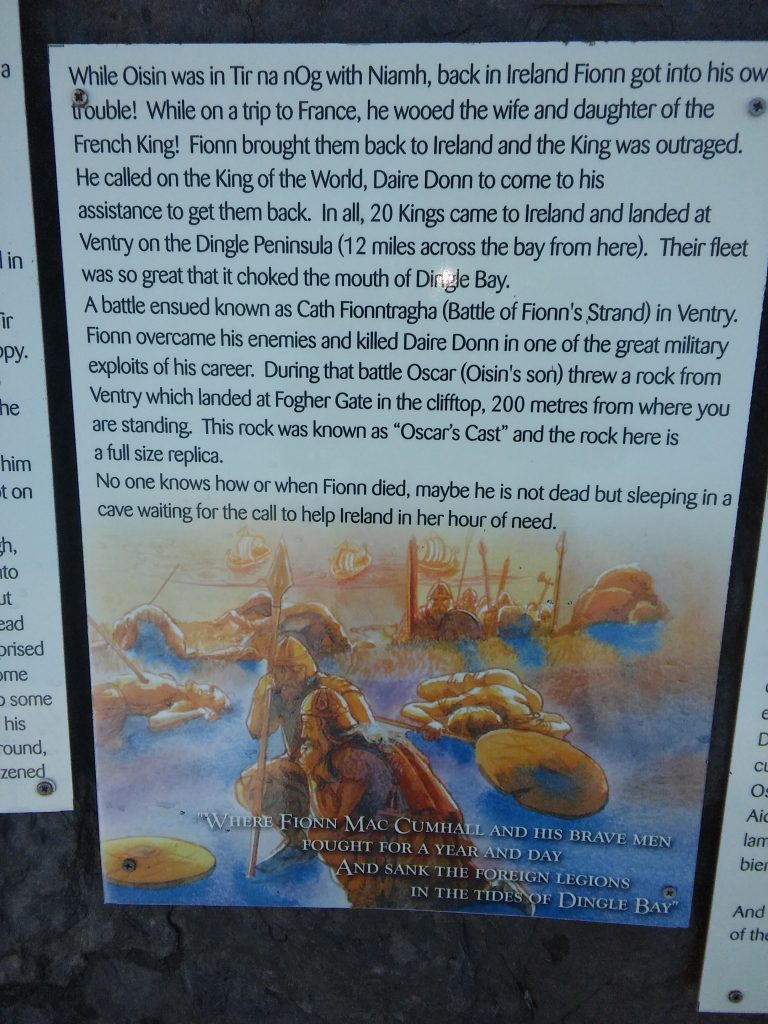 Valentia Island entered the history books in 1857. After nine years and several attempts, a transatlantic cable was successfully laid down from Valentia to Newfoundland, cutting communication time from 10 days (by ship), to one day (by telegraph). It only worked for a couple of weeks before ‘Wildman Whitehouse’ blew it up by applying too much voltage in an attempt to overcome a weak signal. Glad, I wasn’t him! 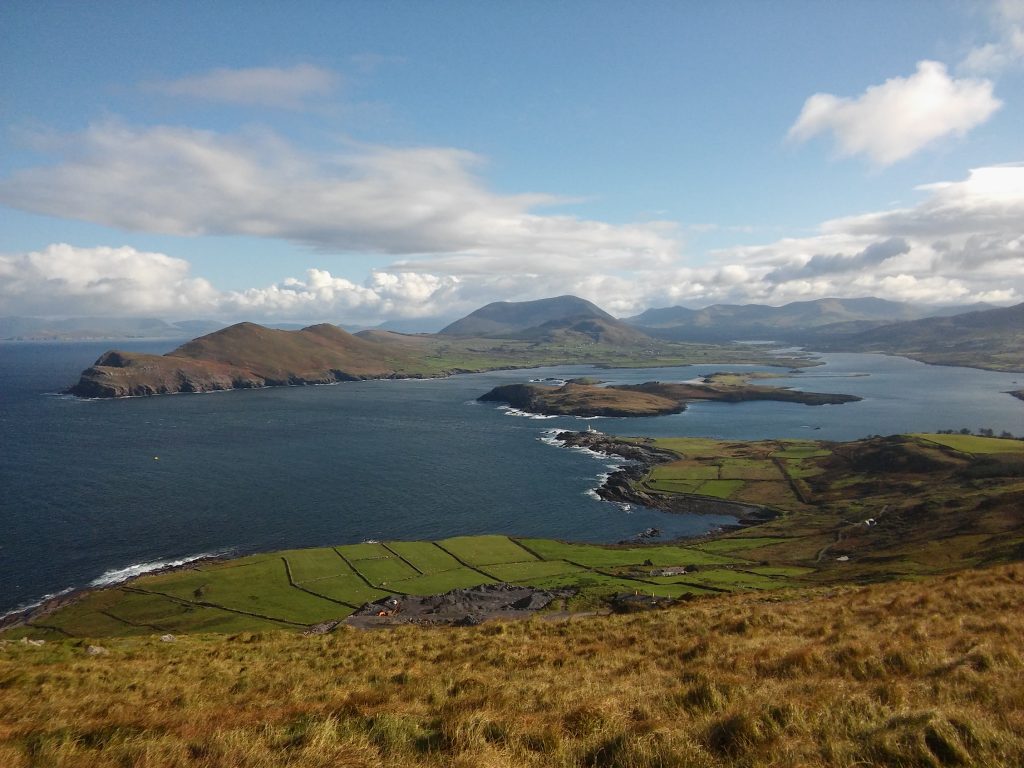 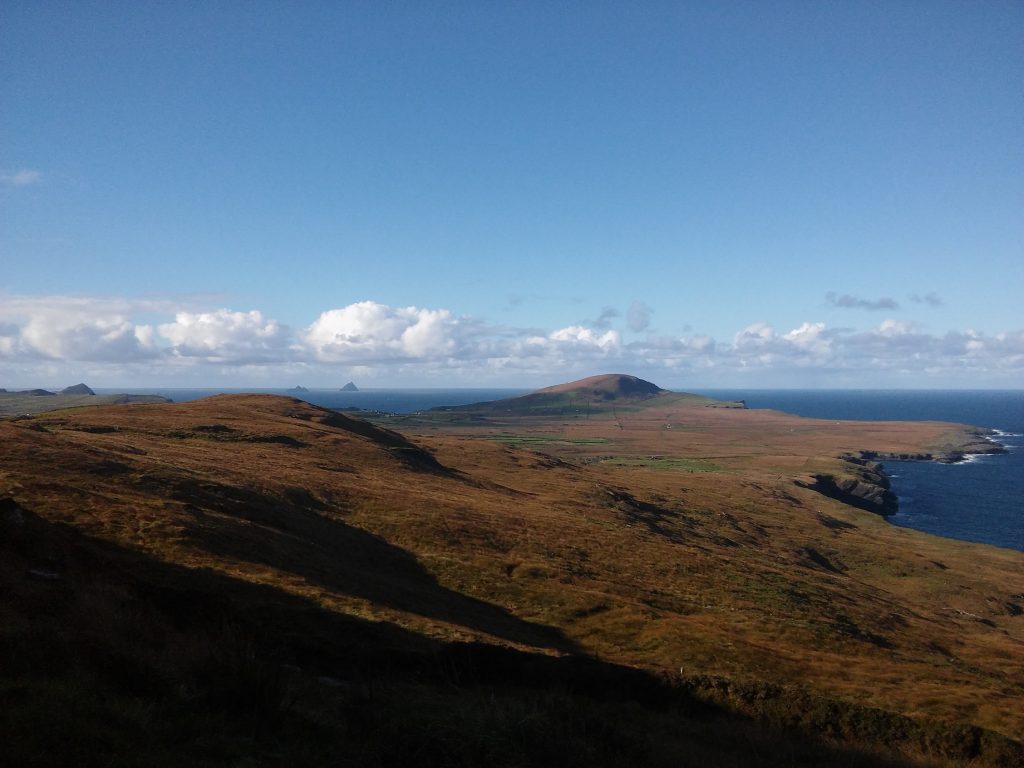 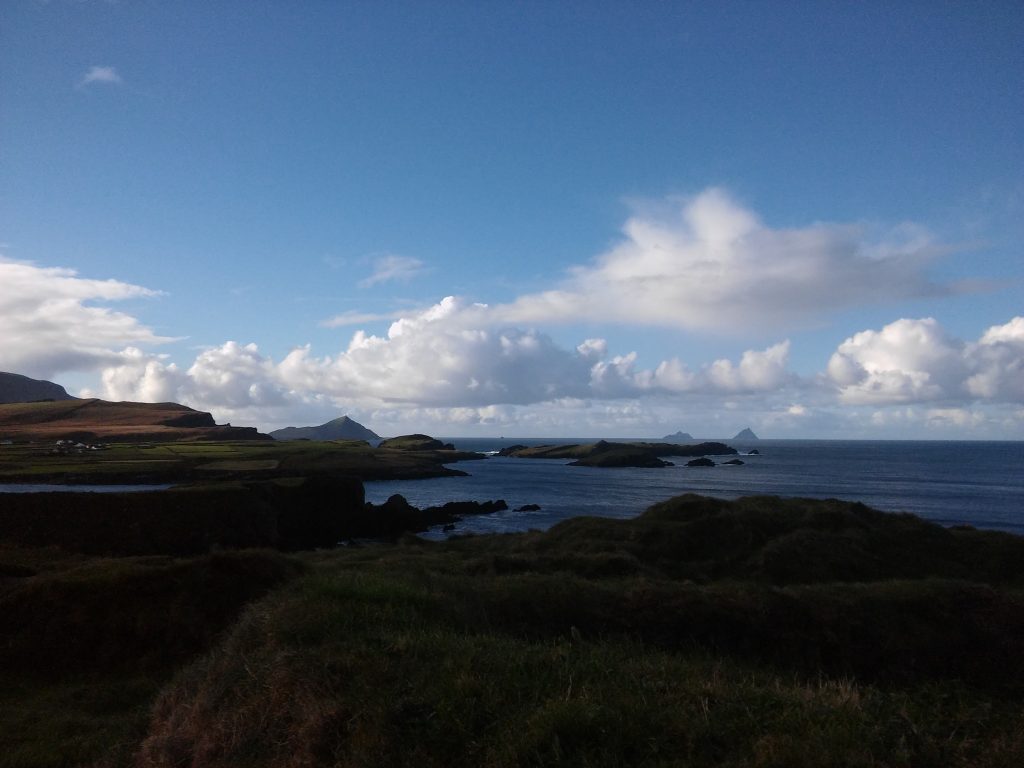 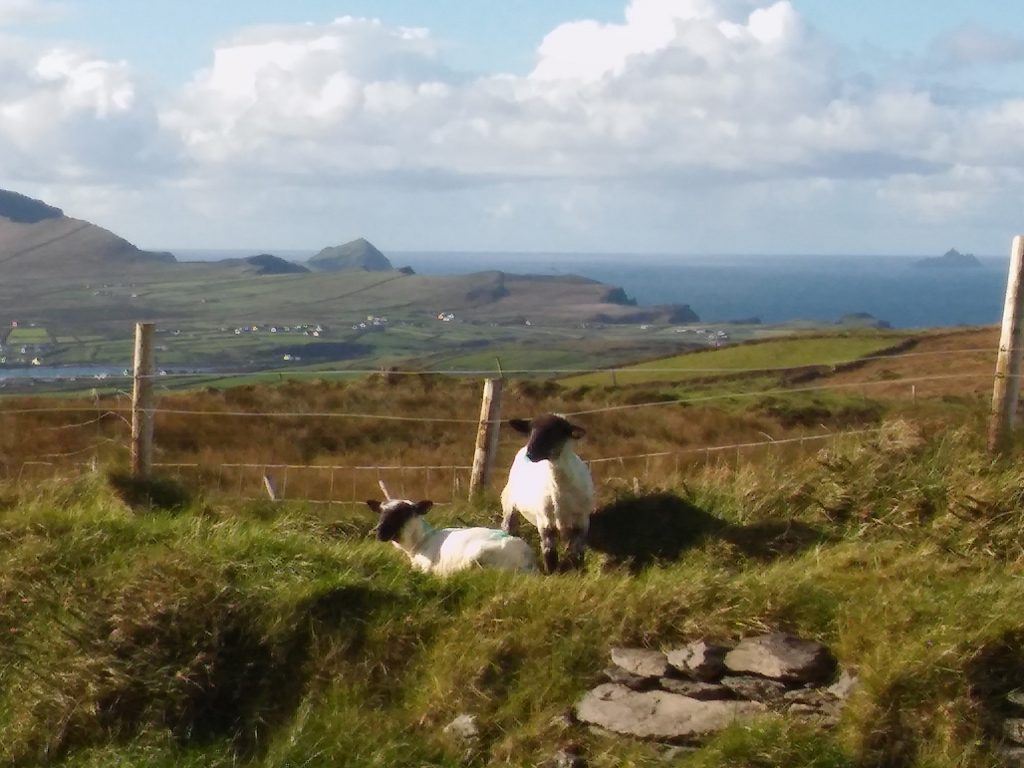 Our next port of call was the Kerry Cliffs. A typical trip to Ireland often features a visit to the Cliffs of Moher, but that was too far north for our trip and would have to wait for another time. Thankfully, Ireland’s west coast is full of spectacular cliffs and whilst I can’t compare Kerry’s cliffs to County Clare’s, I can certainly recommend them. Here are some of the stunning views, looking out to the Skelligs. 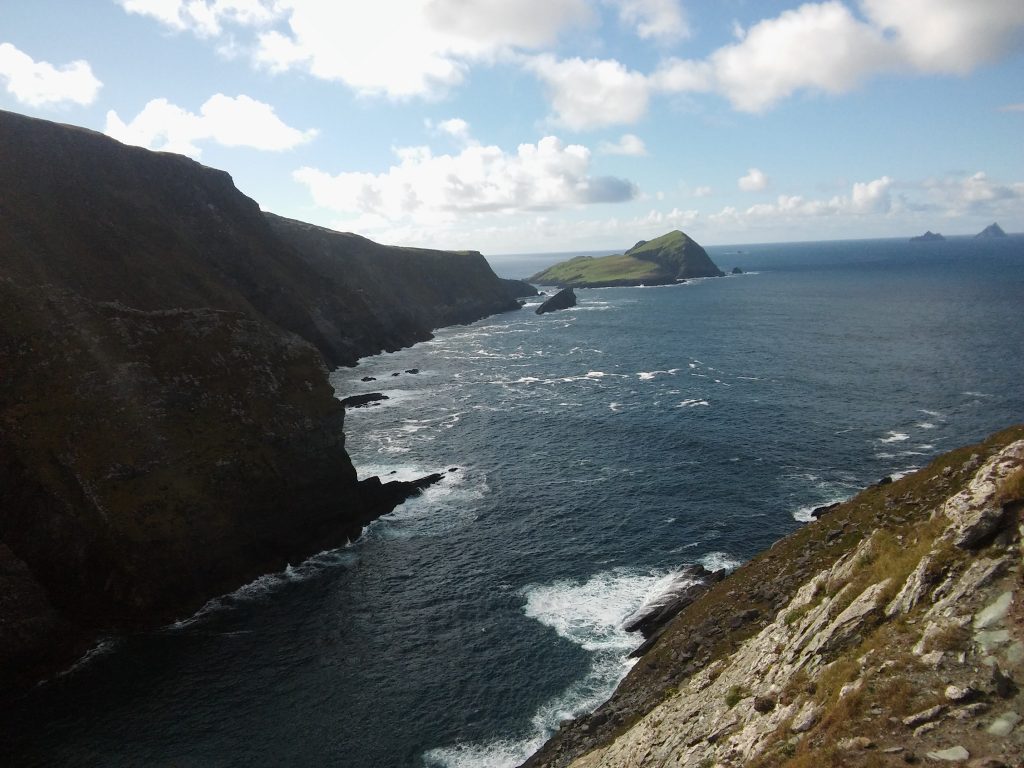 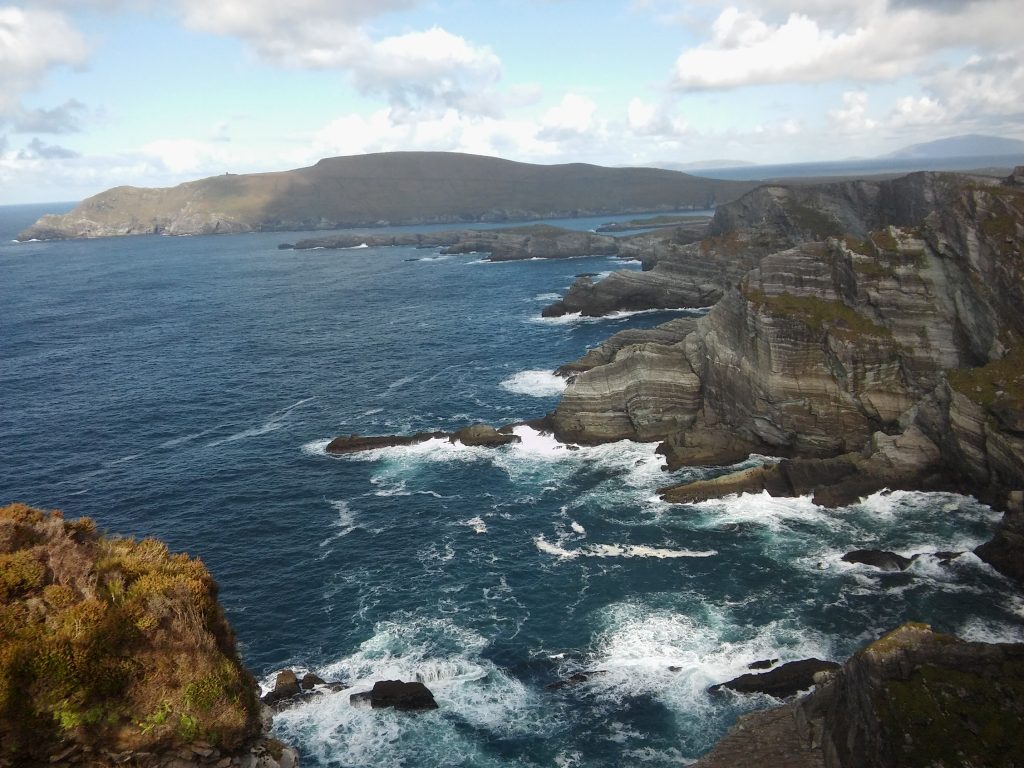 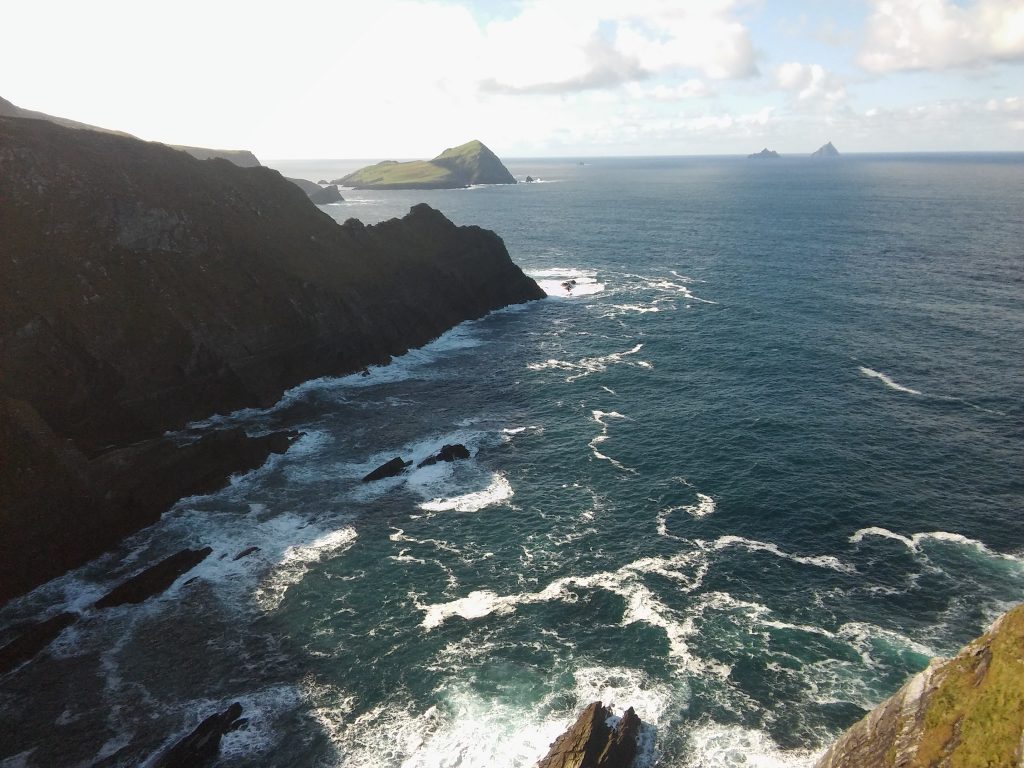 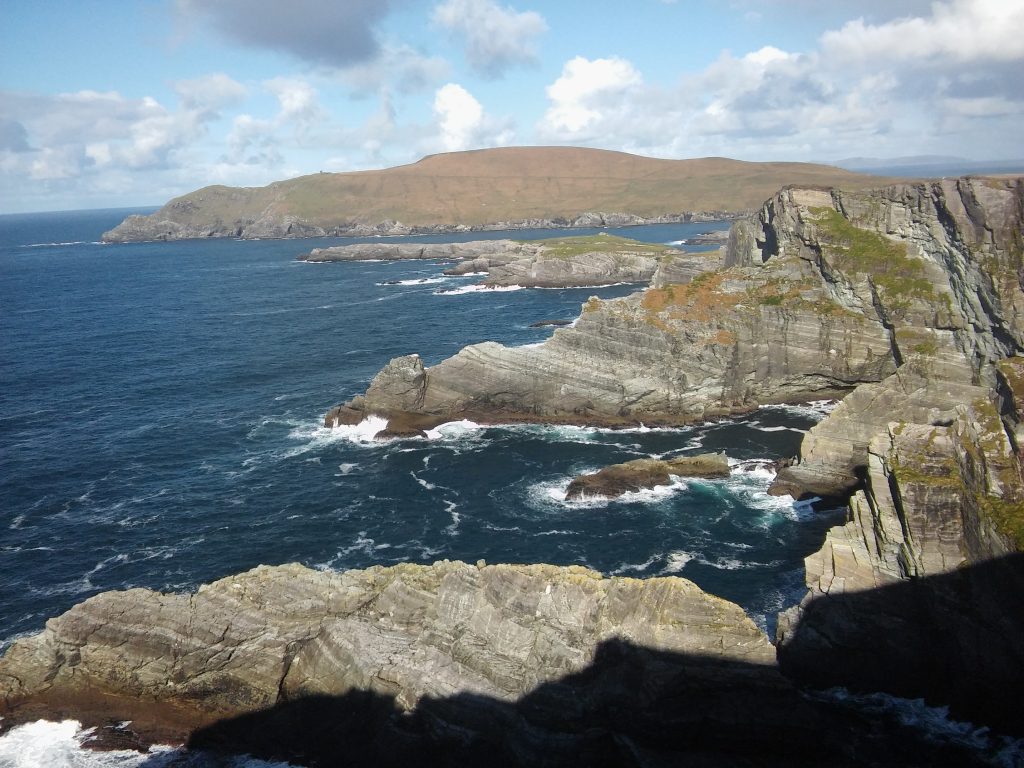 The Skellig Ring is a beautiful, narrow, winding road. A recommended stopping off point is the chocolate factory, but it’s closed on Saturdays. You could probably take two-three hours to explore the area; we did it quite quickly because we’d spent longer than imagined on Valentia Island and had a booking for horse riding in Caherdaniel.

Horse riding on the beach in Caherdaniel

As you can see in the pictures, we’d been very lucky with the weather that morning and thankfully it managed to hold out during our horse ride on the beach. Caroline Donnelly, the owner of Eagle Rock Equestrian Centre, sized us up for helmets. Sylwia had ridden once in a paddock and the closest I’d come to riding were rides on a mule and a camel. After giving us some basic instructions, we were thrown in at the deep end! We left the stables in a group of four horses, trotted along a small road and onto the beach where we tried some cantering, we splashed through water and climbed up and down sand dunes. The views were spectacular and my horse Murphy was very steady. It is definitely an experience that I recommend and a hobby that we hope to continue. 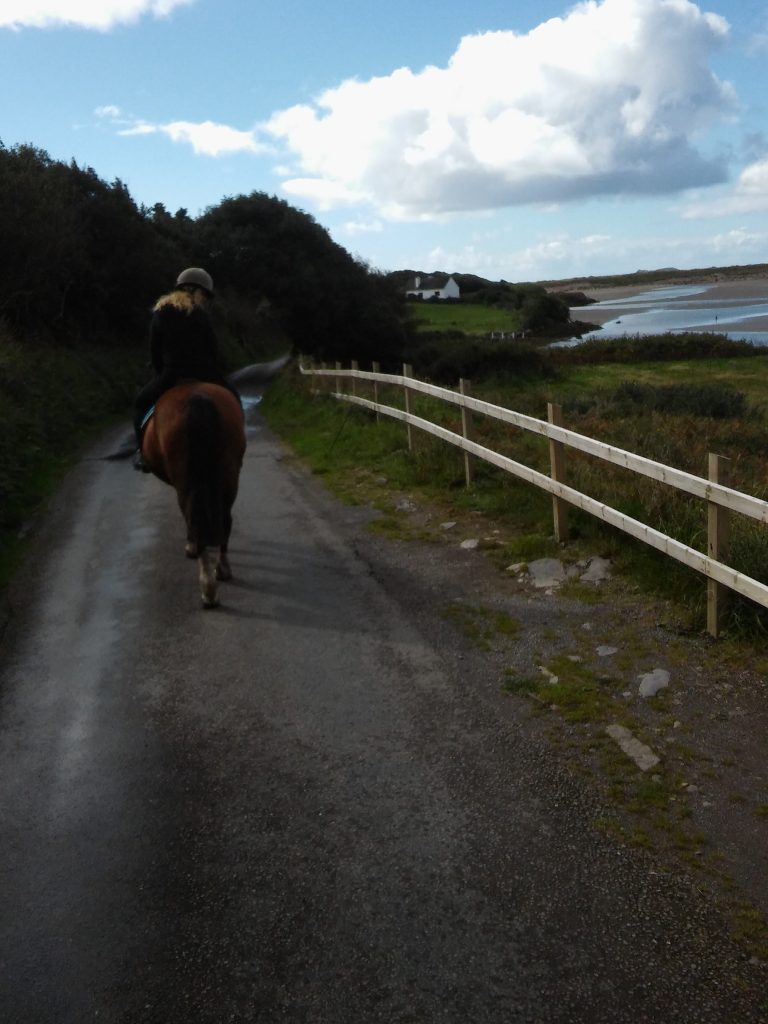 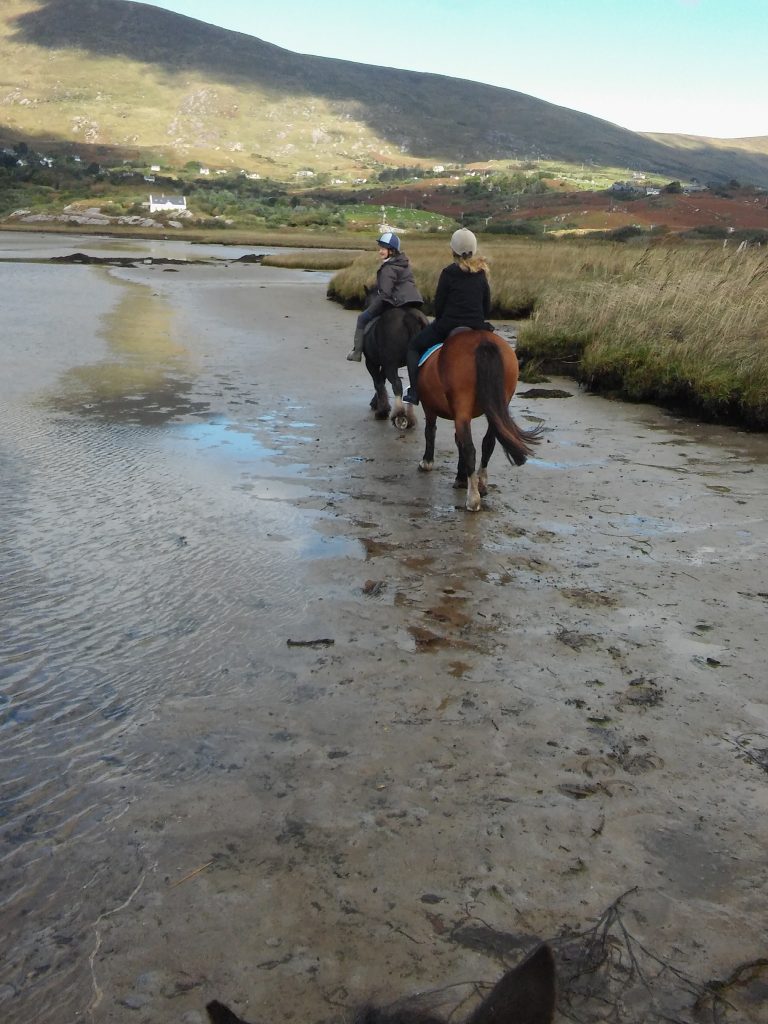 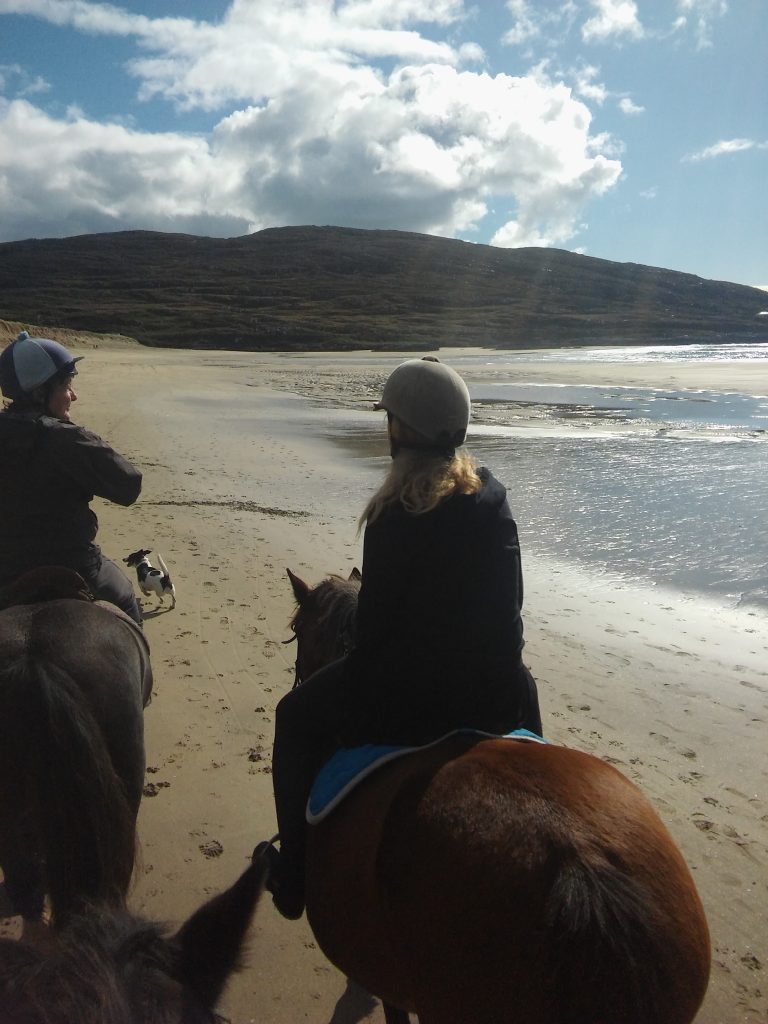 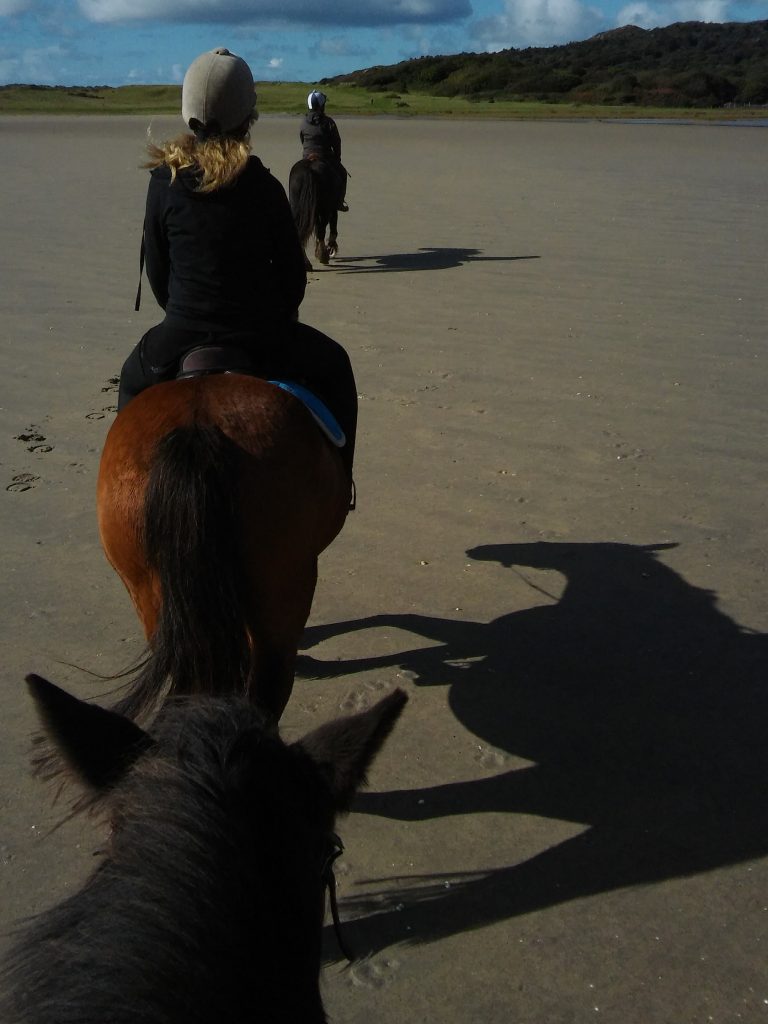 The Ring of Kerry

Caherdaniel is one of the many villages on the ring of Kerry, a route that shows off many of Kerry’s wonders and can keep tourists busy for days, we dipped in and out of the route, calling in at a handful of the sights and generally enjoying the views and country lanes. Our first stop was the village of Sneem, where we had a spot of lunch on the village green. There were quite a lot of French and German tourists milling around which detracted a little bit from the charm of it. We followed the route inland to Ladies View, by which point it was quite wet and spent some time down near the river, where several dogs were enjoying playing ‘fetch.’ Our final stop before going to Killarney was Torc Waterfall, where a race of some kind seemed to be taking place. Opposite the car park at Torc Waterfall is a path that leads to Muckross House, through the deer-filled grounds of the estate.

Killarney was bustling with activity but we edged our way through the traffic to the lake shore and Ross Castle. Unfortunately, we badly struggled to get the suitable light to take even a half decent picture, but it really is quite nice! 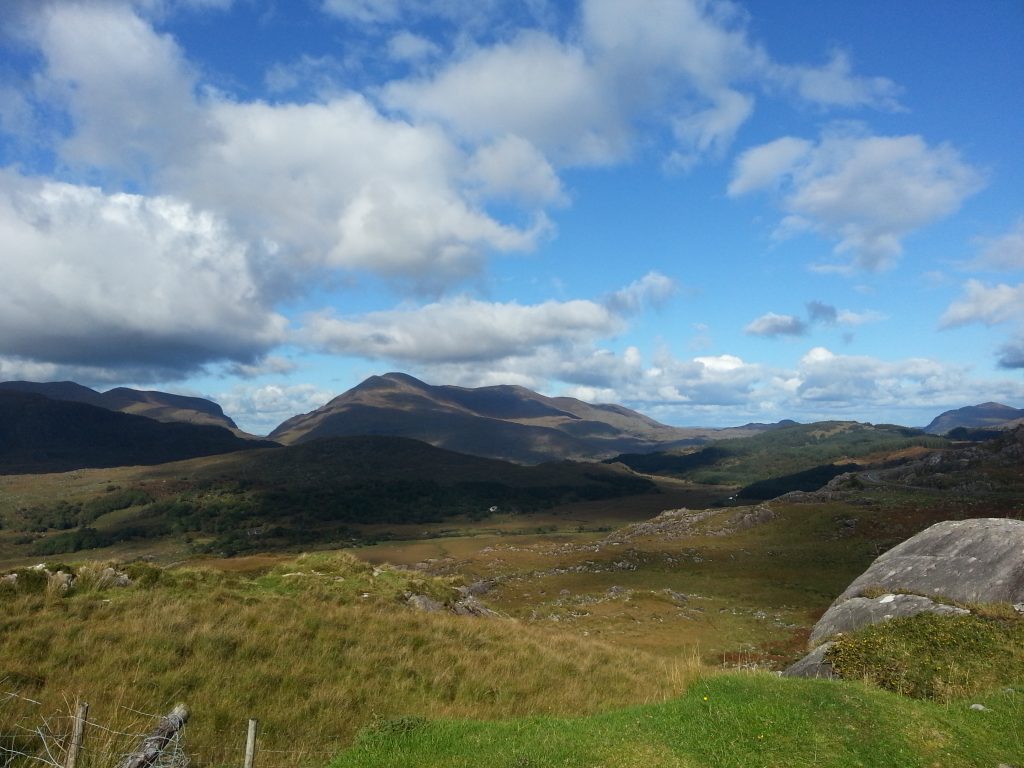 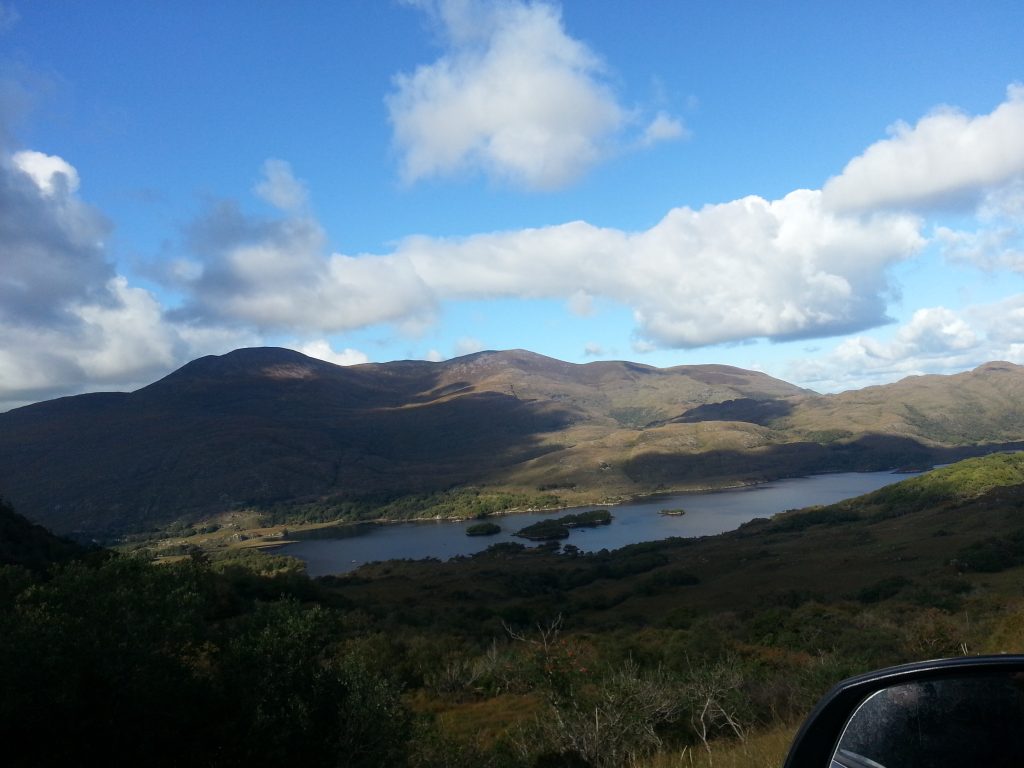 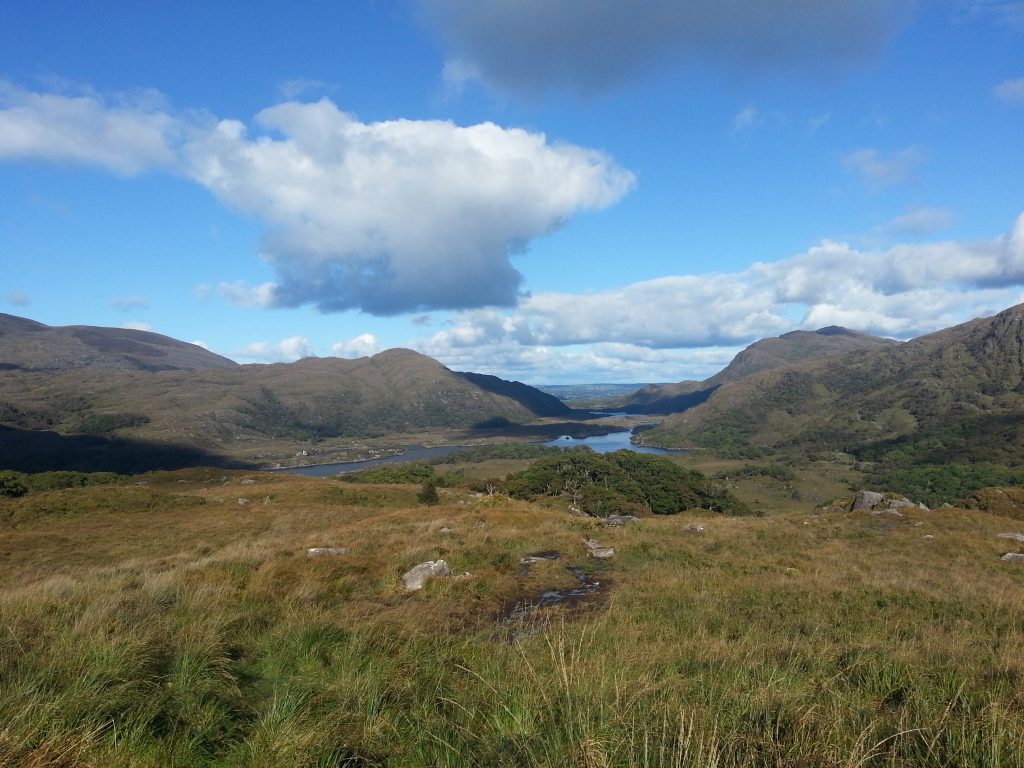 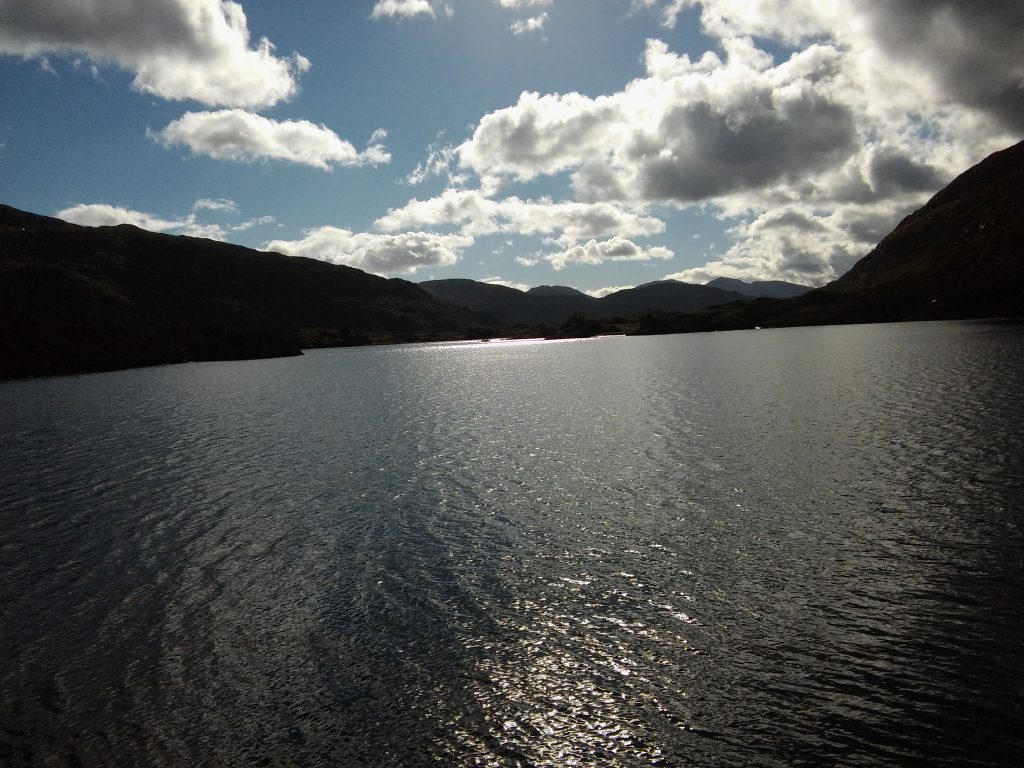 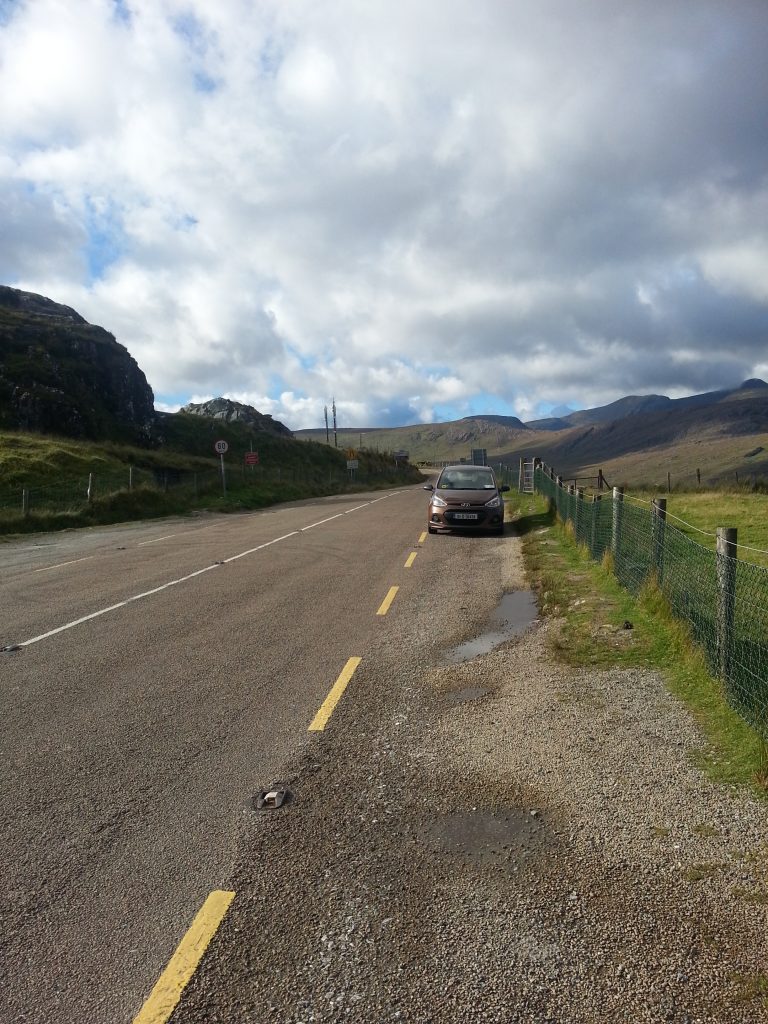 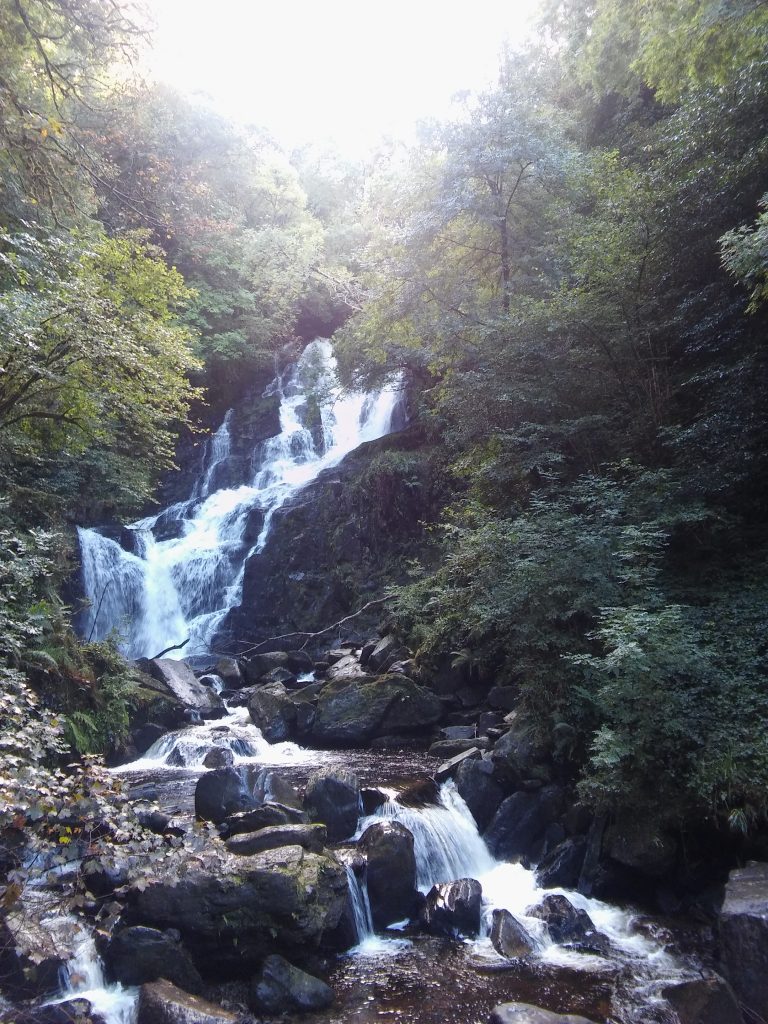 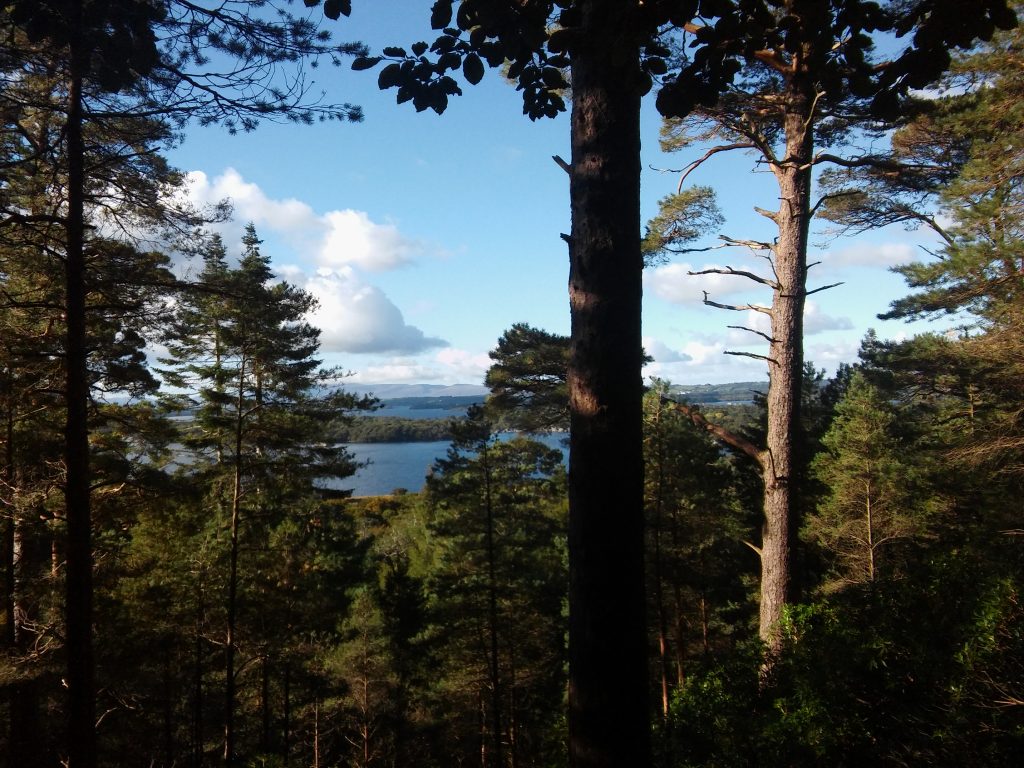 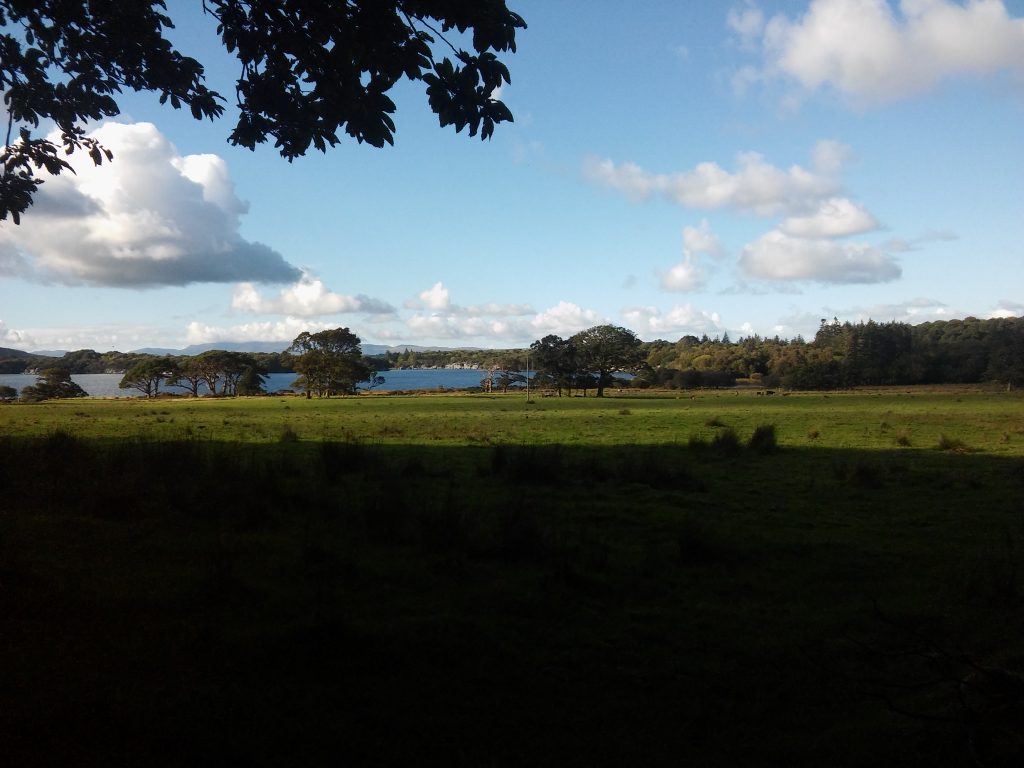 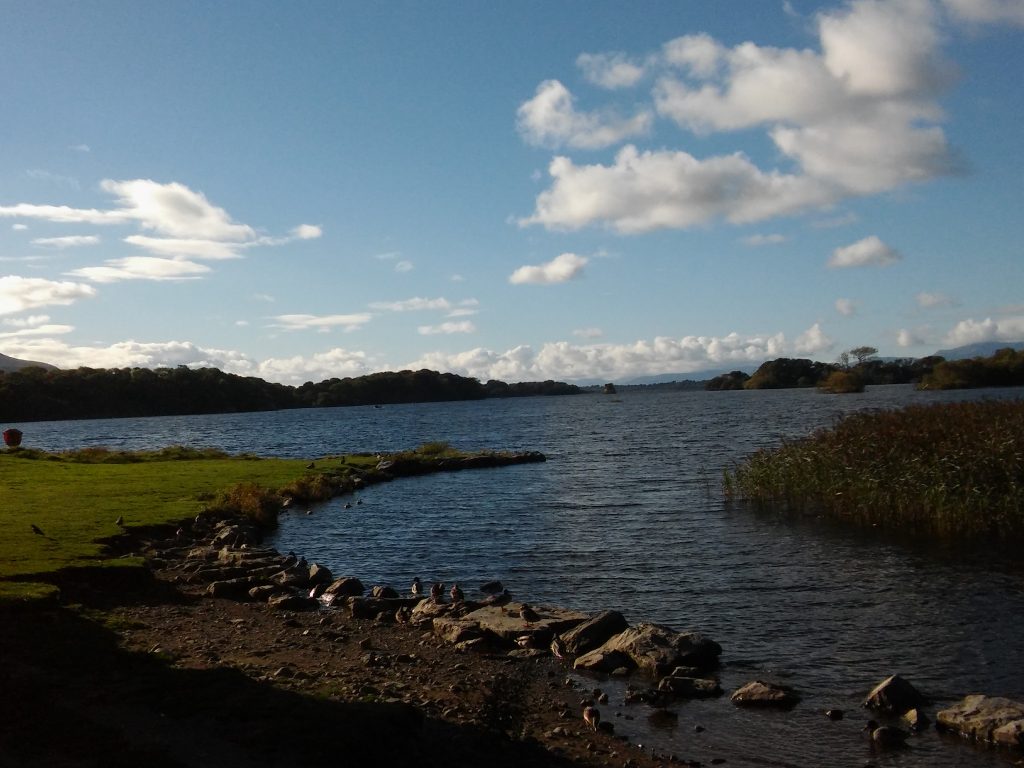 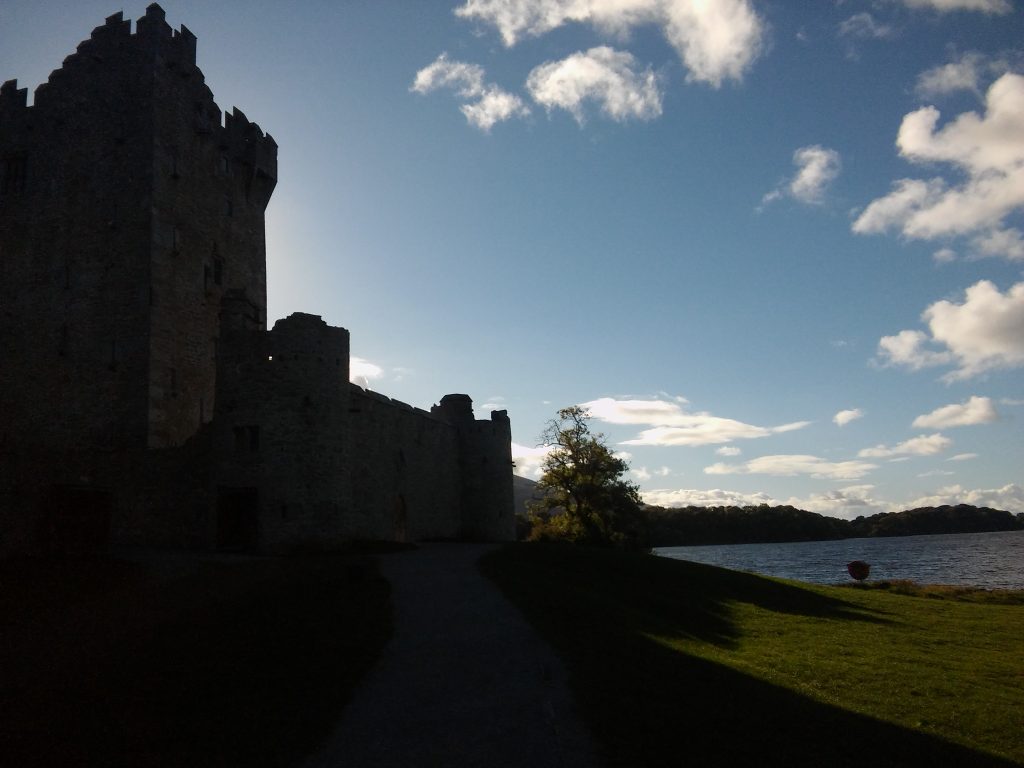 Our second day in Kerry was over and we spent the evening driving back towards Dublin, where we were due to spend Sunday. We stayed in a village near Kildare, right in the heart of horseracing territory.

Next time:  Find out why we liked Malahide more than Dublin.

inlet – a small arm of the sea

necessities – things which are necessary

smuggler – a person who exports or imports goods illegally

jutting out – sticking out

perched – resting on top of

to graze – to feed

paddock – a small enclosure for horses

stables – a place where horses are kept / sleep

trot – a horse gait faster than a walk

canter – faster than a trot

to dip in and out of – here: to visit some of the sights but not all

spot of lunch – a small amount of lunch

detract – to take away from something

fetch – the game a dog plays, collecting balls or sticks and returning them to their master